Mollie runs on high octane. At six months old she’s a rocket ship in the grouse woods. Our older dogs hunt and she follows, then tears about a bit on her own, all the while trying to sort out what life is all about. Birds equal excitement, there’s no doubt about it.
Yet she is cautiously bold. Isn’t that an oxymoron?
Not really. When she encounters something new, she stops to watch a bit, maybe analyzing or trying to figure out what it is or what it does. Let’s hope she does that when she encounters her first porcupine.
During her forays into the grouse woods, her range is less than Maggie’s, which is good, and she regularly checks back to see where I am. When she gets a nose full of scent she slows or stops to figure things out, then points. What more could I want? 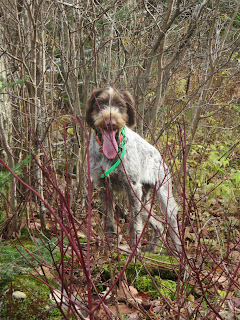 It was December a long time ago, just me and my wirehair, Chara, hoping to fine some late season grouse. Barely a dusting of snow covered the ground in most places, but maybe an inch hid in the shadows of the softwoods. The leaves and the woodcock were long gone, it was ruffed grouse we were after.
Back in October, every time we hunted the high side of that logging road the dogs would find birds. For well over a mile we didn’t moved a one. A bit discouraged, we took to the low side of the road, hunting down toward the softwoods that stand along the river.
Chara went on point and the day improved. More than a few birds hid in the edge of the softwood stand. Down a little slope I noticed an iced over beaver pond and headed that direction.
Chara’s bell fell silent.
She was off to the left beneath tall spruce and fir trees where the ground sloped toward the pond. Hurrying toward her, a grouse exploded upward and another burst toward the pond.
Reflexes fired my gun. A grouse fell onto the thin ice of the beaver pond. The thought of my dog running out onto that ice scared me to death.
Chara had once been steady to wing and shot, but those days were long gone. Hunting alone much of the time, it became impossible to enforce and I was no longer doing hunt tests. This bird hunting was supposed to be fun.
Slipping and sliding, I hurried down toward the pond. Chara hadn’t seen the bird fall and worked the slope looking for a dead bird. What a relief.
When she got down to the edge of the pond I hitched her to a tree. A small but long dead fir tree reached the bird and slid it to firm ground. 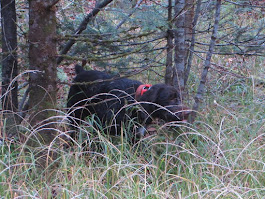